Almost Famous: Sister of MSU Cornerback Gets 15 Minutes of Fame 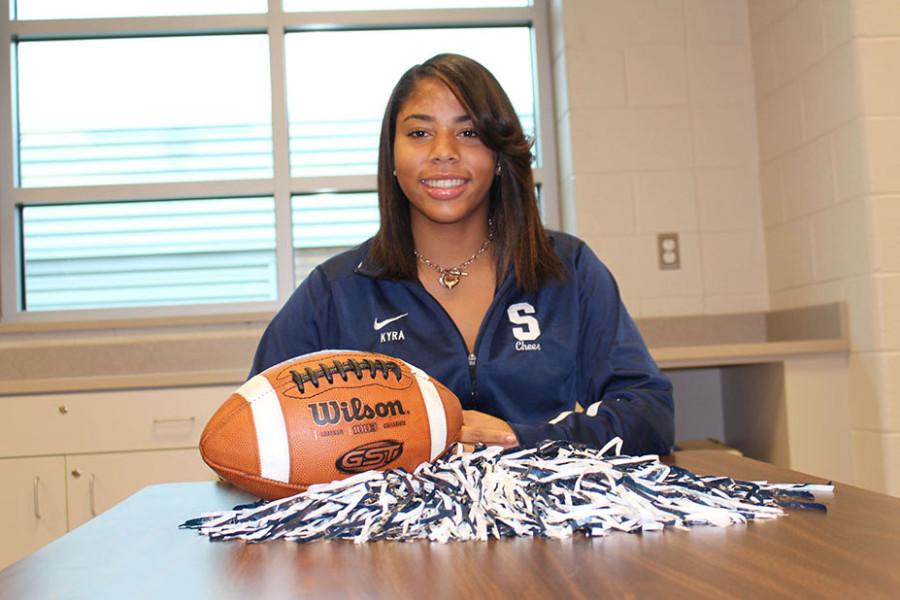 Go Green: Sophomore cheerleader Kyra Watts-Jackson is her famous brother’s biggest cheerleader. Her brother is Jalen Watts-Jackson, the cornerback for Michigan State University who scored the game-winning, last-second touchdown against the University of Michigan this year.

It was a college football game that will go down in history.
With six seconds left on the clock, the University of Michigan was up by two points over Michigan State University. As the punter for the University of Michigan was about to kick , he dropped the football. In-coming Jalen Watts-Jackson of Michigan State, with his swiftness, grabbed the ball and ran with it. He won the game for Michigan State University.
“I didn’t see the ball until it got in my hands,” said the star. “I saw the time on the clock and just ran with it.”
Jalen has become very well-known because of this history making play, but few seem to know he has a sister named Kyra Watts-Jackson who attends Southfield High School and is a varsity cheerleader.
Jalen Watts-Jackson attended Orchard Lake St. Mary’s for high school – an all-boys school.

Varsity Football Coach Tim Conley says there have been other cases where the football brother attended Orchard Lake St, Mary’s, while the sister attended Southfield High.
The varsity cheerleader for the Blue Jays says she was not in the stands at the historic football game, but she and her mother and sister were gathered around the television at home to watch and support her famous brother. “As the game was ending, I heard my brother’s name, not knowing that it was him running the ball,” says Kyra. “I then turned to my mom and yelled, Ma, that’s J! That’s J!”
She and her family members were ecstatically cheering and yelling at the TV screen. That’s when Krya realized that her brother was making college football history. “As he scored, we started hitting the Quan and doing the Nae Nae,” said proud sister Kyra. “My mom cheered as she kissed my papa’s obituary, and then the calls from family members started to flood,” Kyra said.
Kyra says she was motivated by her brother’s talent long before he made that famous play. When she was younger her brother played football for the Southfield Jayhawks little league team. Kyra attended Jalen’s little league games and watched the cheerleaders, in hopes that she would become a cheerleader one day. She was fascinated by the chants and energy that they possessed.
It wasn’t too long after that when Kyra started to say, “Jalen gets to go to practice, why can’t I? With that request,this hopeful, determined little girl was able to become part of the Southfield Jayhawks cheer team. Then only five years old, now 15 years old, still cheering.
Kyra insists her bother’s stardom has not affected her home life much. The family has been getting attention from the press, though. “It has been exciting, especially when we went to East Lansing for his press conference,” following the game, Kyra said. “That was interesting seeing the reporters and photographers wanting to interview my brother.”
The star player was, in fact, injured during the historic play and has a small fracture in his left hip socket.
“I am getting better and better every day and I am not experiencing any pain,” said Jalen.
Kyra and her family continue to travel to East Lansing to visit Jalen regularly because of the injury, which Kyra says has not put a damper on his or her spirits. “He’s still the same ole “J,” and I’m still his ‘annoying’ little sister.”
Jalen is expected to recover fully in six months, and Kyra’s family continues to pray for a full recovery as well as the continuation of high spirits within Jalen.
Kyra is the proud little sister of Jalen Watts-Jackson. Maybe one day she will be able to cheer with the Michigan State University Spartans and cheer for her brother, just like the old days.

4 Responses to “Almost Famous: Sister of MSU Cornerback Gets 15 Minutes of Fame”

If you want a picture to show with your comment, go get a gravatar.