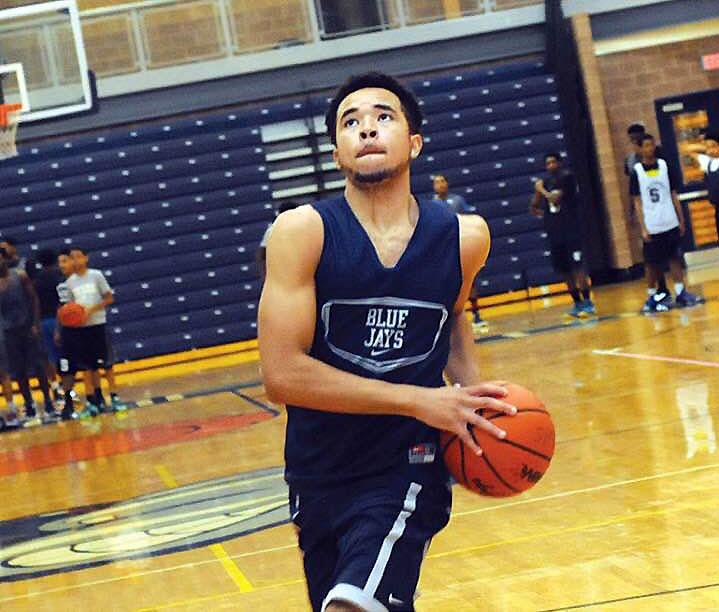 Point Man: Junior Michael Flowers goes for a lay up on his home court. He hopes to become an engineer one day if he cannot play basketball professionally.

It is a rare event when one player puts 50 points on the board during a single basketball game, but that is exactly what junior Michael Flowers did recently when the Blue Jays played Allen Academy of Detroit.
It’s just an example of what the 6 feet 2 inch, 182 pound point guard can do.
And he hopes to do more of that, especially when Southfield High faces Southfield-Lathrup this year on Jan 30 and again on March 1.
Southfield High is slated to merge with Southfield-Lathrup High School by Fall of 2016, making each court battle this year all the more important for it will lead to eternal bragging rights.
With two previous years of varsity experience, Flowers made an early impact on the team.
Before being on the varsity squad, before ever attending Southfield High, Flowers was introduced to basketball by his father, Henry Flowers.
His dad and his Uncle Tim Flowers had a strong love for the game, Michael Flowers said. Though the father and the uncle played high school basketball, none were able to reach past the college level.
As a child, Flowers had dreams of going much further. He dreamed of taking that game-winning shot. He shot anything he could get his hands on, including paper balls in the trash and dirty clothes in the hamper.
He idolized big time players like five-time NBA champion Kobe Bryant and the NBA’s reigning MVP and NBA champion Stephen Curry. Flowers said, “I like Kobe’s mind set, his attitude, how he takes over a game. Both players spend endless hours in the gym and I try to do the same.”
His dream is to play ball at Michigan State University, but they have not yet expressed an interest in Flowers. Flowers, however, said he has been approached by both Stanford University and Kent State University regarding his future on the court.
As a freshman on varsity, Flowers came in a bit nervous.
Fast forward two years later and he is a team leader.
Flowers says of Coach Michael Avery “He’s hard on us, and I look forward to starting the season with him.”
As for the merger, Flowers says he welcomes the Lathrup players to join his team. “I kind of look forward to it; they were a rival school, but it can better the team.”
A lot of pressure is on Flowers in his junior year. He balances adjusting to a new head coach, plans to lead his team to the District Championship, and will also be the leader of the last Southfield High School basketball team. But for one last time, he says he’d like to defeat the Southfield-Lathrup Chargers. Maybe even by 50 points.