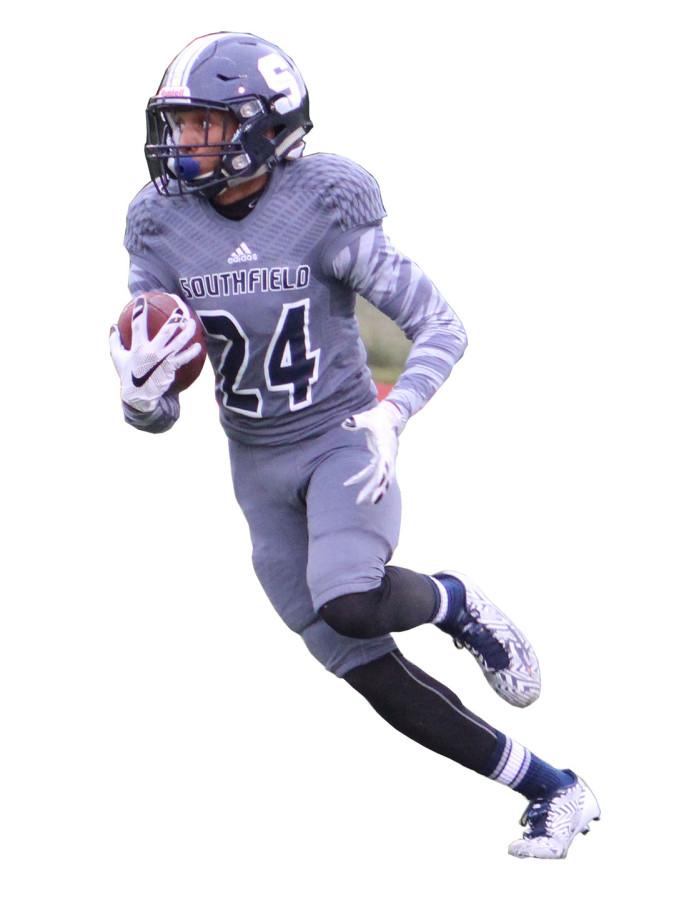 Run, Josh, Run: Senior wide receiver Joshua "JP" Pickens demonstrates what he does best. He cradles the football and picks up yardage for the Blue Jays.

At 5 feet 10 inches and 165 pounds, Joshua Pickens may not be your typical wide receiver, but he can surely get the job done.
Known as “J.P.” by his teammates, Pickens sets a high standard for himself as well as his teammates. Number 24, with the head full of exploding curls, is the playmaker and the go-to guy for his team, leading the Blue Jays to their fifth straight playoff appearance.
Who would’ve believed that at the start of Pickens’ football career, he didn’t even enjoy playing the game? “Yeah, I kinda hated playing,” Pickens said, “Honestly, I was forced to play by my mom.”
The senior’s love for football first developed out of anger. He released his frustrations about being bullied in elementary school on the field. “A lot of people didn’t know I used to get bullied a lot in elementary school. I just took everything out on the field.”
Over time, Pickens’ motivation for the game began to change. Starting his football career with the Southfield Jayhawks, Josh developed a passion for working hard with his mother’s motivation behind him as well. His hard work would eventually pay off at the high school level.
As a member of the Blue Jays freshman team, Pickens modeled his game after some of the big time players in college football. De’Anthony Thomas, who now plays for the Kansas City Chiefs and Tavon Austin who plays for the St. Louis Rams were his biggest influences, he said. With similar height and speed, Pickens dreamed of following the path they had taken in their career. “I watched a lot of NFL and college football and that’s what motivated me”.
Not until junior year would Pickens become a starter for Southfield, being one of the only junior starters on varsity last year. “During the off-season I worked on everything. I wanted to be better than last year; I wanted to out do the seniors,” Pickens said. And sure enough, his talent stood out for being the best blocking receiver on the team.
Coach Conley said,” He is a really good blocker and we counted on him for that.”
“J.P. has improved in every aspect over the past two years,” said teammate Tim Brown, a senior and a team co-captain.
Now it’s Pickens’ senior year, and the pressure is on. With the loss in the semifinals against De La Salle last year, he is expecting nothing less than a championship. Pickens is somewhat philosophical about the playoffs: ”When it comes to winning and losing, you should never be too high on a win and you should never be too low on a loss.”
Pickens has taken a bigger role on the team this year by maturing and even playing a little defense.
He hopes to put his skills to work when the Blue Jays take on Berkley in the second round the playoffs on Friday, Nov. 6, at 7 p.m at Berkley High School.
Whether the Blue Jays win the playoffs or not, Pickens hopes to continue his career in college. He has grabbed the attention of Ferris State University, Grand Valley State University and the University of Missouri , also known as Mizzou. Eyes are on him, but he says he has his eyes on a football championship for now.