To an Athlete Dying Young 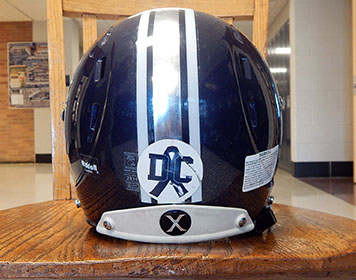 Memories: The “DC” stickers on the back of the football team helmets this season are tributes to the late football player Darius Cooley.

Every player on the football team this year has a “DC” sticker on his helmet in honor of the late football player Darius Cooley, who would have been a junior this year.
Cooley, who lived in Oak Park, fell in the deep end of a pool and drowned at Sutton Place apartments, in Southfield, on July 20. He was 16 years old.
Born on May 11, 1999, in Detroit, Cooley was a member of both the varsity football team and the varsity basketball team.

“I am very heart-broken,” said Cooley’s mother, Krystale D. Cooley. “My son’s death just made me think and realize how important each day and each person you love is. I’m reminded that tomorrow doesn’t always count.”
Cooley was a fun person to be around, according to his friend Eric McArn, a sophomore who played football with Cooley.
“I was in shock and disbelief over the news of Cooley’s death,” said senior basketball teammate Jalen Banks.
The death occurred on a hot July afternoon when Cooley was supposed to be at football practice but instead went for a swim with friends.
The jovial teenager was 6’4” tall and weighed 210 pounds, which made it difficult for others to pull him out of the pool, said junior Rodney Harrington,, who was at Sutton Place the day of the incident and was also supposed to be at football practice.
Football teammate George Hill said, “Darius loved to play football.”
Hill mourned the fact that the death could have been prevented if Cooley had come to practice that day.
Hill described Cooley as always being in the “beast mode” – meaning that he played to win.
He was more of a football player than a basketball player, but he still had fun on the court. On Twitter, Cooley once tweeted: “Football isn’t everything; it’s the only thing.”
Cooley wore uniform number 18 for the football team, said Coach Conley. The number is in play again this year, Conley said, and will not be retired.
The well-loved Blue Jay played tight end and outside line backer.
Because of Cooley’s athletic skill and his sense of humor, he was a well-known and popular young man, McArn said.
McArn and Jalen Banks were among the approximate 300 students, relatives and school staff members who came to Southfield High the day after Cooley died for a candelight memorial service organized by Banks and junior Mackenzie Riggins.
In attendance were Cooley’s mother and his step-father, Montell Johnson.
Cooley’s mother spoke before the crowd of people with pain and hurt on their faces at the service held in the school parking lot.
Her speech was inspiring because she explained how every day is not guaranteed.
Cooley’s funeral was held at St. Stephens AME Church in Detroit with the football team members as honorary pall bearers and the cheer team as flower bearers.
At the mother’s request, Cooley’s friends and family members wore Southfield High colors of blue, white, and gray, rather than black, which she said would be too depressing.
Her son was buried at David H. Shepherd Park in Oak Park.
Cooley’s mother invited her son’s friends and relatives to write down their memories of him and place them in a treasure chest time capsule that she kept.
Cooley, by all accounts, had a bright football future ahead of him. He even received a phone call from The University of Michigan to talk about what could’ve been a great future for him with their football team.
Prior to playing high school football he played for the Detroit Cougars, a local team. He won his first championship game at Ford Field when he was 10 years old. Then from 2009 to 2012 he started playing football for Southfield-Lathrup Falcons football team. He was passionate about football.
Cooley’s death shows “Every minute counts,” said Southfield High Football Coach Tim Conley, who asked the football team to wear the helmet stickers in Cooley’s memory.