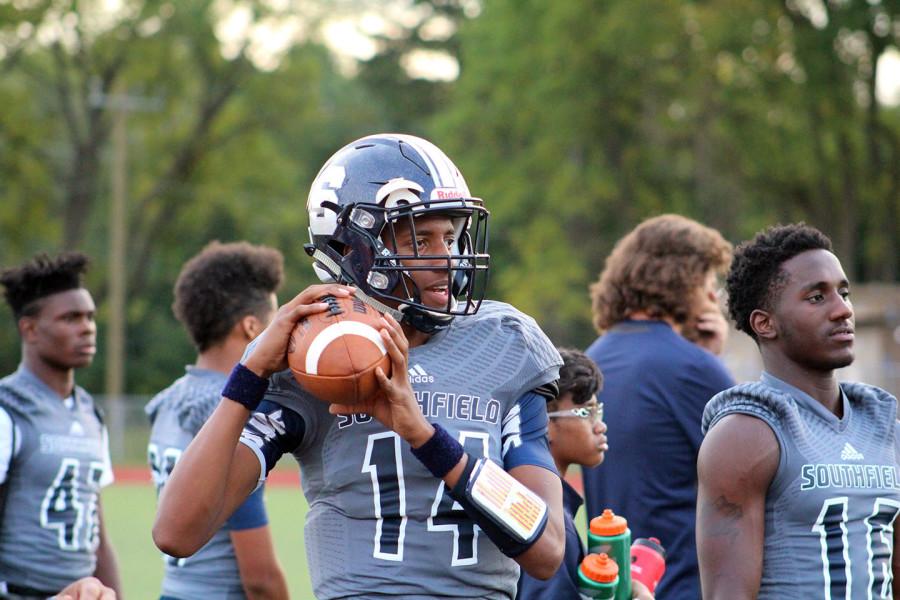 Rising star: Clutching the football is freshman quarterback Sam Johnson III. Southfield hasn’t had a freshman as starting quarterback since Dajuan Warren in 1999.

Freshman Sam Johnson III, has taken the varsity football team by storm by becoming starting quarterback.
Standing at 6 foot 3 ½” inches and weighing 176 pounds, Johnson is projected to be one of the top players in the country in 2019.
The freshman phenom has been playing football since he was eight years old, attracted to the style and the color of the uniforms. He made his football debut on the Detroit Milan Tigers little league team.
Little did he know that he would become nationally recognized for his talent. He has sparked the attention of the state of Ohio, receiving 6 Division 1 offers coming in to high school, from colleges such as Bowling Green State University, Cincinnati University, Ohio State University and Miami University. This makes him the first person in Michigan to ever receive college offers in the eighth grade.
Johnson came to Southfield High School from Oakley W. Best Middle School in Dearborn, Michigan. Why did he come to Southfield High? “Although I had many options to choose from, I picked Southfield High because I liked how the school was run,” he said. “ When I started going to the practices, I enjoyed them and the coaches were cool.”
Johnson said he is confident he made the right choice coming to Southfield High, which last year graduated 18 athletes with college football scholarships.
Outside of football, Johnson said he also hopes to play basketball for the Blue Jays.
When the athlete is not in school, on the field, on the court, or in the gym, he enjoys hanging out with friends, playing video games, and eating. His favorite foods are chilli dogs and nachos while his favorite games are 2k and Madden.
Johnson said he is motivated by the love and support of his family. As he is the only boy out of five children, he spends a lot of time working out with his father, Sam Johnson II, on top of the extensive and rigorous practices at school.
Johnson’s dad also played football in his high school years at Redford High School as defensive tackle.
Down the line, Sam Johnson III said, “I would like to play for the Carolina Panthers because of (quarterback) Cam Newton.”
Quarterback are considered team leaders. So with that title, Johnson said he feels like he has arrived as a leader.
His coach, Tim Conley, said Johnson has been a tremendous asset to the team. “He exceeded the expectations of being quarterback and a leader of the team.”
The Blue Jays do team building exercises as well as hanging out at each other’s houses from time to time, which makes it easier to communicate on the team.
Johnson, with four sisters, has found his brothers in the Blue Jays.