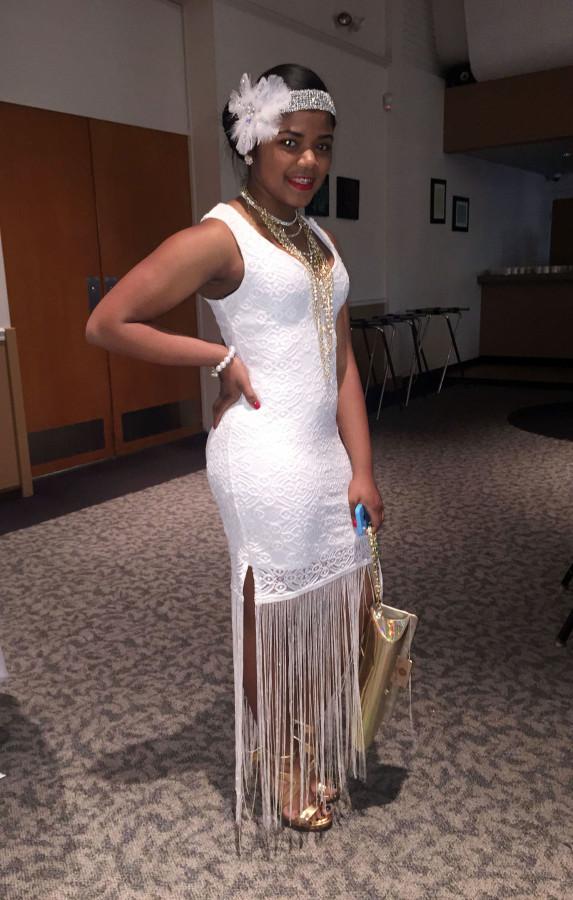 Flapper style: Sophomore Wynter Worthy (above) was the belle of the Band Ball in her flapper dress.

More than 150 band members and their parents attended the annual Band Ball at Shriners Silver Garden, in Southfield, on May 1.
Some who attended dressed for the Great Gatsby theme, while others just dressed up.
The evening included awards for band members, announcements of who will be next year’s band leaders, a buffet dinner, and dancing to a deejay.
Catching lots of looks was sophomore Wynter Worthy, who attended in a fringed white flapper dress, headband and gold and silver accessories.
Band Director David Miller announced that juniors Miles Jones and Monica Harper will be band captains for the school year 2015-2016.
Junior Breanna Cross was named head drum major. Assistant drum majors will be junior Marlon Carter and sophomore Darryl Clarke.
Cross said she loves Band Ball because she gets time to spend with friends and watch seniors have one last bonding moment.
The new auxiliary commander is junior Ramoni Overton. Junior Teka Richardson was named as commander of the dancers, and junior Jackie Wheeler was named commander of the majorettes. Loren Brown-Ross was named flag commander.
The buffet included baked chicken, pasta, broccoli, salad, dinner rolls, mashed potatoes and cake.
Graduating senior Turquoise Clark said, “The senior presentation was so nice.” It was a guess-who slide show of baby pictures and band performance photos, along with cap and gown photos.
Senior Tyra Lee said she enjoyed the evening of bonding with her band family one last time.