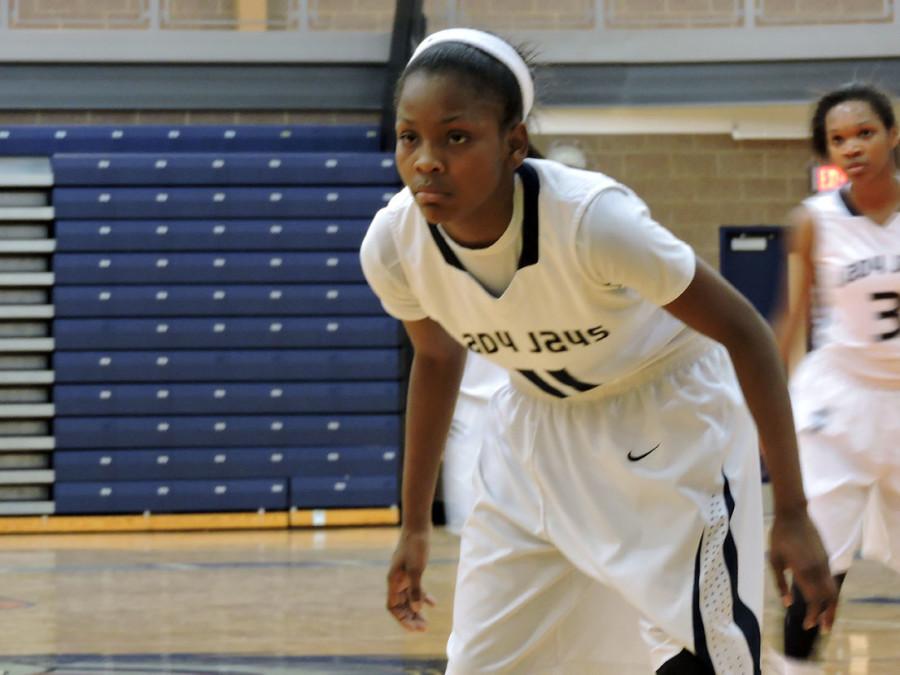 New talent: Freshman D''layna Holliman focuses on her game. Holliman is the top scorer on the team.

With the help of freshman D’layna Holliman, the Girls Varsity Basketball team is soaring toward the playoffs with a 10-2 record.
The team has won several games by blowout scores, including Pontiac (65-17), Berkeley (60-27) and Oak Park (48-21).
Head Coach Jamie Glinz says partial credit for the team’s success this year is owed to Holliman, who joined the team at try-outs. “Having this young talent not only play with the older girls but lead the team at scoring is definitely a part of the team chemistry,” Glinz said.
The coach said he thought he had his team mostly figured out by try-outs until freshman Holliman showed up and showed out. “Holliman is aggressive, tough and a great scorer,” Glinz said.
Junior Stormeigh Mattison had a lot to say about her teammate Holliman, who rocks jersey number 11. “She takes care of business every time on the court, and we really work well together.”
Mattison wasn’t done there, adding, “She really reminds me of me of my freshman year but with more discipline.”
The phenomenal small forward stands 5 foot 7 inches tall and has been playing the game since third grade. She might not be the loudest player on the team, according to Mattison, but she is definately passionate about the game.
Defending and being able to get the basket are by far Holliman’s strong points and those skills have been helpful in boosting her game average to 11 points.
Not only is Holliman a high scorer, but she has already created a signature move that has attracted some attention. When each game is about to start and the star player names are being called, Holliman is the one who beats her chest with her fist three times. Holliman said, “It’s a pride thing, showing that I’m here, and it’s my time to ball out.”
Holliman says she feels some pressure being the youngest on the team, but that doesn’t slow her down: “I’m equal with my teammates; they don’t look at me as a freshman, but just a teammate.”
Holliman says, “It was a surprise being on the varsity team, but once I made it, I just worked hard ever since.”
Mattison predicts, “Once she is a senior, she will guide her team and definitely be the leader and the old guy on the team.”