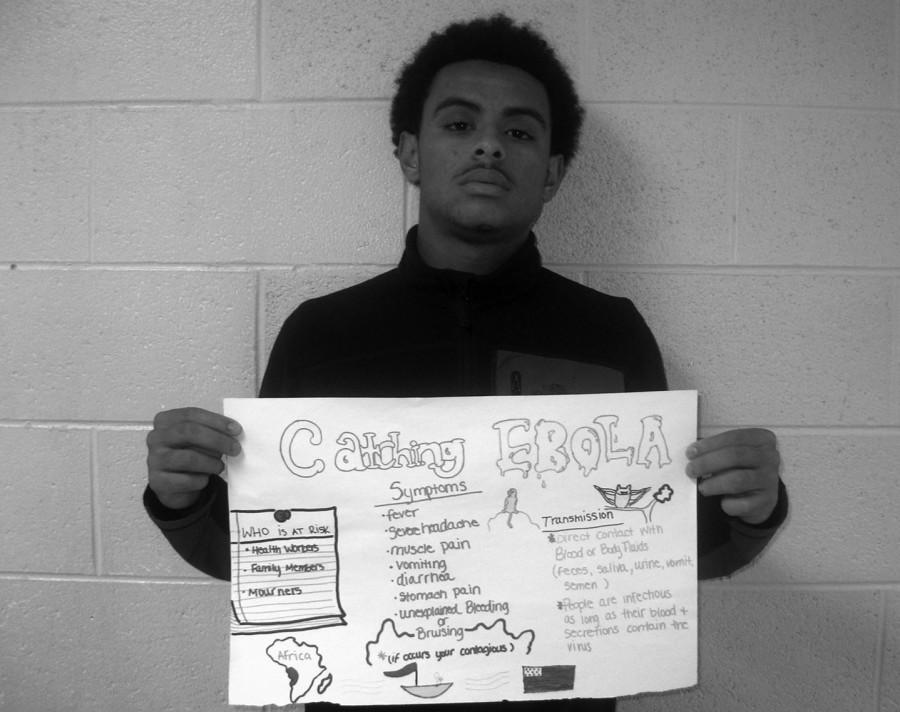 Poster child: Senior Joshua Stovall displays his Ebola project, which was a poster about contracting Ebola.

The Ebola virus has come to Southfield High School. Sort of.
In response to the Ebola outbreak in Africa, science teacher Kimberly Wardell-Stone and her student teacher, Dr. Benjamin Unger, made Ebola a part of their curriculum by educating students on the effects of the deadly virus as well as the causes.
Unger said, “When approximately 38 children come into a classroom saying, ‘I have Ebola!’ or ‘Eww, you have Ebola!’ there has obviously been a serious issue with a lack of education.”
Unger said, “There are many deaths from the common cold or even influenza, but we are freaking out over four (Ebola) cases in the U.S. Yes, there’s a high fatality rate, but people in third world countries have greater issues with this virus.”
To increase awareness, Stone’s and Unger’s students made posters with facts and effects of Ebola. These posters, Stone says, are going to be hung around the school to further inform other students.
Senior Jabre Wallace, who was among Stone’s students, says she now knows, “Ebola is a virus that may or may not kill you ,depending on the proper treatment, and where or who the treatment is coming from.”
Students learned that there are two types of medicine Ebola victims can receive to further increase antibodies to fight the virus. Survival for Ebola is most likely the outcome (for those who have the virus) , if treated in the U.S., students were taught.
In response to the many media reports and student comments, Stone and Unger devoted two days to inform students on the “nasty” Ebola virus. Stone says, “I got tired of hearing Ebola be used incorrectly.”
Ebola is an infectious and often fatal disease marked by fever and severe internal bleeding, spread through contact with infected body fluids, such as urine, sweat and vomit. Ebola is not airborne.
Stone summed up the lesson by saying, “The best way to protect yourself is to educate yourself.”