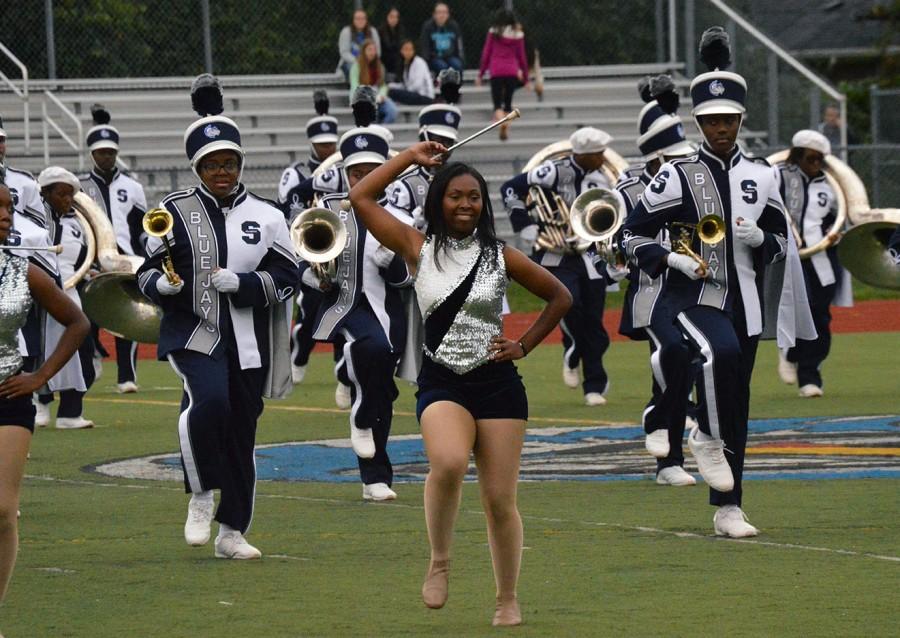 The Marching Blue Jays have new uniforms, a new trophy and a new music teacher to help them meet their goals
this year.
The band spent more than $100,000 on crisp new uniforms. Musicians now have zip-front jackets with overall pants and white capes, topped with shako plumed hats.
The majorettes, dancers, and flags fund-raised to purchase their own shiny uniforms that complement the musicians.
Wearing those new uniforms, the band achieved one of its greatest goals, which was to win the Shaw competition against Oak Park High
School, which had won the competition the previous year. The stinging defeat last year to Oak Park
provided the ultimate motivation to win this year, said band member Joelle Jamerson, who plays baritone.
The competition took place in Cleveland, Ohio, at Shaw High
School, on September 20. Southfield High School had the victory that they had been waiting for. The marching band had practiced every day this year since July 1. Because of their determination to win,
they focused on the fundamentals and worked toward success.
Band director Miller said, “They worked on the immaturity and lack of fundamentals due to the
numerous freshman musicians.”
Miller also now requires his section leaders and drum majors to attend a mandatory two-week leadership camp in the summer.
Trumpet player Dennis Brown, who is new to the marching band this year, says, “We had to put in
effort.”
Aiding the band with its musicianship this year is new music teacher Chris Kuhn, who teaches concert band, choir and orchestra classes. He also attends marching band practices to offer tips to the musicians.
The juniors and other members of the band aimed for success and had faith they would bring home the Shaw trophy.
Dancer Kyrah Gradford-Dye says, “We don’t have any competition because we’re the best!”
The band earned the Grand Champion title at Shaw, bringing home first place Overall, first place for its band, and first place for its auxiliary. They were the only band to receive a standing ovation.
The faith and confidence of the band paid off.
Miller says, “No matter the circumstance – competitions, halftimes, or parades. – we focus on our
product.” Miller adds, “Scores are opinions, our product is our legacy.”