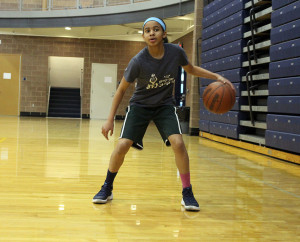 Freshman Rizaria Franklin walked into a different life when she made Southfield’s Girls Varsity Basketball team.
Along with a new school and new team, she had to adapt to a new basketball tradition. On the team, everybody has to run when one team member’s grades drop.

It turns out that making the team is only part of the battle. Keeping good grades is the rest of it.
“I’ve set a higher standard for myself, and so did my coaches,” said Franklin, who also played on her middle school team.

Basketball coach Jamie Glinz holds the girls to a standard, not allowing them to receive less then a B- in a class. “We are trying to create a culture where academics are important,” said Glinz. “If they don’t perform how they are supposed to, we run.”

Which couldn’t be more true. At most practices so far this year, someone on the team has had a grade lower than a B-. So the team members have had to run between 20-100 wind sprints. That means running from one end of the court to the other and back.

“It’s our goal to push our athletes to the next level; academics will do that,” said Glinz. “The WNBA doesn’t pay millions.”

An example of Glinz’s idea in full effect is the “team brain,” sophomore Tyler Washington, who maintains a 4.0 grade point average (g.p.a.) with two advanced placement classes. “Having practices and games then going home to a pile of homework can be stressful, but in the end, it’s all worth it,” Washington said.
Although Washington is starting point guard on the team, she doesn’t rely on just her athletic talent. “Even if you’re a star player, we all still need our education,” Washington said. “We’re mostly using basketball as an outlet to college.”

One person who says she benefitted from the coaching strategies Glinz uses is the girls varsity captain, Stormeigh Mattison. Mattison said she has made a full 180 degree turn around academically. “In ninth grade, I didn’t care too much; I just wanted to have fun and play,” Mattison said, “but as coach Glinz talked more and more about college, I got more focused and decided to stop playing games.”
Now, Mattison’s overall grade point average is at a career high of 3.7 cumulatively, she says, and she still plays the sport she loves.