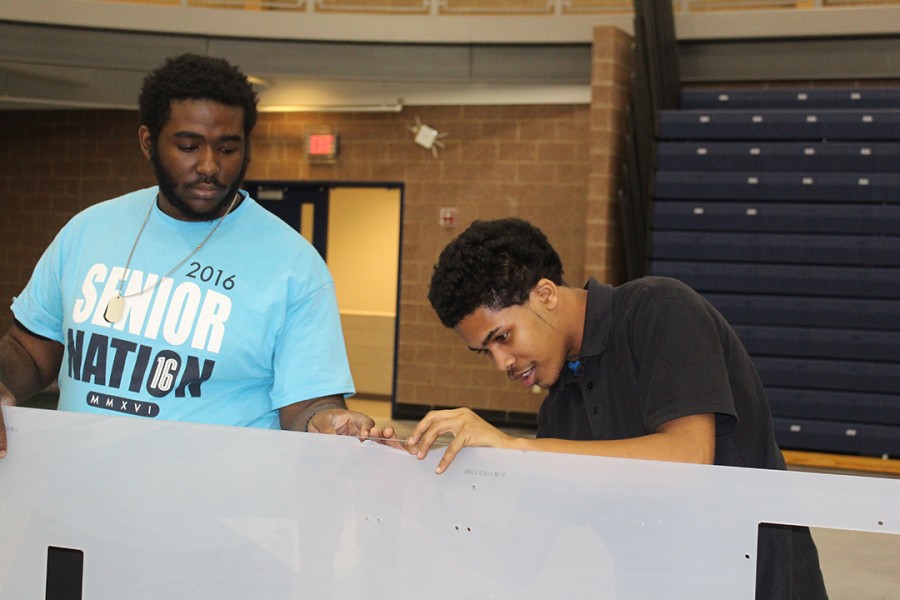 The Southfield High School Robotics team known as Team 94  (The Techno Jays),  will be hosting their third annual regional competition Friday, March 4, and Saturday, March 5,  in the field house.

More than 40 schools from around the state are expected to compete. In preparation for the competition The Techno Jays, along with other robotics team members from different schools will  set up the playing field.

All teams had six weeks to build their robot, which for the Southfield High team meant team members had to stay after school and come in every Saturday for the duration of the building time.

This year’s game is called FIRST Stronghold and robot will have to cross terrains, shoot boulders and scale castles. “It’s a game with thousands of variables,” said SHS Robotics adviser Joseph Minnick. “It is difficult to build one machine that has to do so many things. We have to pick a strategy and work with it.”

During the competition two team members drive the robot and one person functions as the human player. Junior Tyler Washington is this year’s human player for SHS, and it is her job to feed the boulders directly into the robot.

Senior Etaune Johnson will be one of the robot drivers this year. H is also the robotics team captain.  Johnson said, “The job of being a driver is stressful because we are directly responsible for the robot.”

Alongside Johnson will be senior Kalean Owens, also driving the robot. “We have high expectation this year, and I will do whatever it takes to come out on top,” said Owens.

This is potentially the last year for the team because Southfield High School is merging with Southfield-Lathrup and the “Techno Jays” name (based on the SHS Blue Jays) will no longer fit. So Minnick invites everyone to come watch this year’s event and cheer them on to victory.

In last year’s competition, the Techno Jays advanced to the semi finals but did not make it to the finals.