Star Athletes Get All the Love 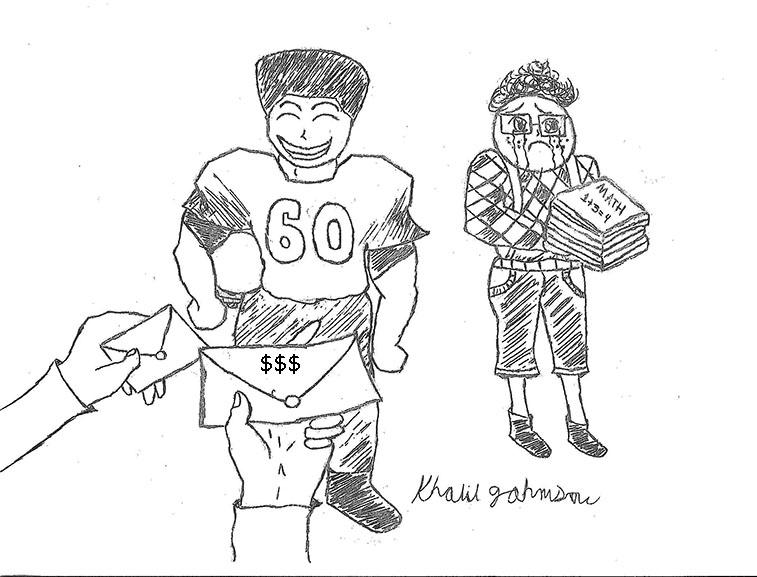 A touchdown or a 4.0 grade point average, which is more captivating? According to the ratio of scholarships between athletes and scholars, it seems to me the athletes have the upper hand.
Athletes have talent scouts trying to recruit them for colleges, and athletes continue to be the very faces of the schools they attend. However, scholars have immense difficulty trying to get attention from colleges to give them scholarships.
Freshman quarterback Sam Johnson III happens to have six full scholarships to six different colleges, including Ohio State, Miami of Ohio, Bowling Green, the University of Michigan, Adrian College and Oregon. He says he has a grade point average of 3.5, and plans to major in engineering.
In a recent conversation with me, Johnson said he feels his many scholarship offers reflect his dedicated work ethic and his strong grades.
Another top athlete, football senior Matt Falcon, confirmed he has 24 full scholarships to schools including the University of Michigan, Ohio State University, and Oregon. He said he has a 3.0 grade point average. Falcon insists the effort athletes put into football and balancing their school schedule is what attracts the scouts more than anything.
But here’s the problem, as I see it: Valedictorian Nakole Turner happens to be one of the hardest workers in the school. She has a GPA of 3.9 with five Advanced Placement classes under her belt. She is also involved in plenty of programs: Band, NHS, Scholars Plus, Student Congress, Social Circle, Robotics, and this newspaper. She said she doesn’t have any scholarships yet.
This tendency to give athletes all the love over the scholars says a lot about our society. We seem to value athletes over scholars, and star athletes get all the love.