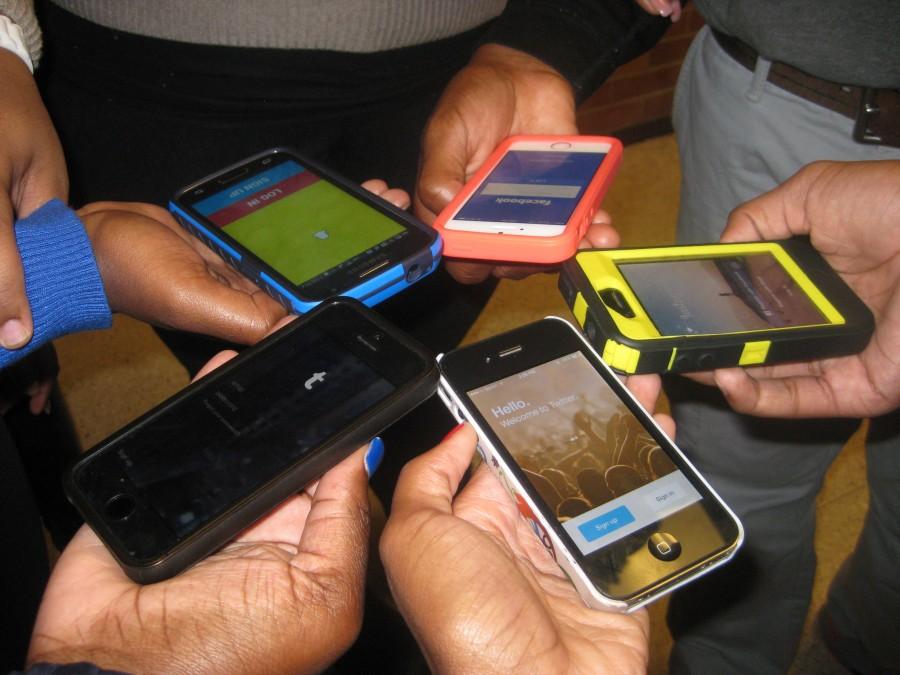 Teens use cell phones to visit social media sites and post throughout the day Their cell phone cases are part of their fashion accessories and can change to match outfits. The phones above are all Southfield High student phones.

Ninth grader Kaijah Carter visits Twitter, Instagram and Facebook multiple times each day to read what her friends post and to post updates about her life.
She says sometime her friends tweet about the TV shows they are watching or post pictures of their to-die-for Cocoa Puffs – harmless stuff.
But where is the line drawn for revealing too much information?
English Teacher Karen Valentine-Melton advises the Social Circle club, which meets after school and helps students learn how to create a positive digital image for themselves. The club is open each fall to new members and meets monthly in room B-223.
Melton says teens should avoid posting photos of themselves in provocative poses and should never post comments with profanity. “Avoid posting anything that shows you in a negative light,” Melton says.
She also advises teens to keep an eye on who follows them on social media. “Screen them” and delete anyone who seems questionable, she advises.
Junior Jalen Banks has his own ideas of where to draw the line. He says, “Selfies and positive thoughts are fine to share, but relationship problems and status are not OK.”
According to toptenreviews.com 73 percent of teens are on a social media network, and 73 percent of teens could possibly be over sharing information, as in revealing too many personal details about their lives.
Carter says teens should avoid posting photos that show too much skin, addresses, and other people’s personal photos.
Freshman Alesha Mason says she thinks most teens know right from wrong and what’s appropriate to share.
But, for those who don’t know where to draw the line, senior Armani Peace gives some advice she learned from the Social Circle club: “Always be mindful of what you post because jobs, colleges and peers are looking (online) at what you do.”