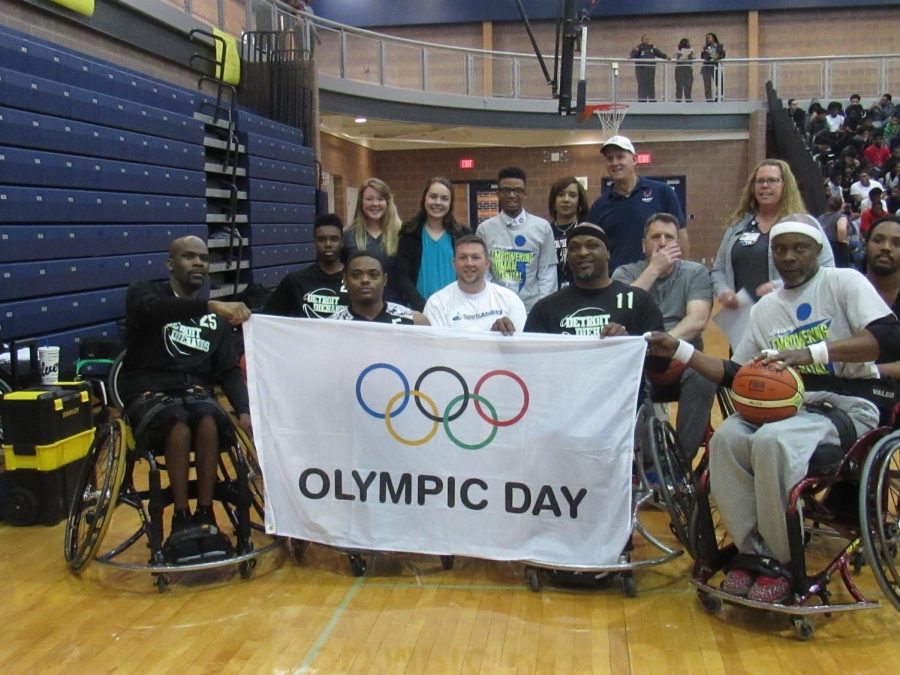 On Wednesday, May 22, 2019 Southfield A&T hosted our very First Annual Olympic Day event in the field house. Mrs. Griffin, Associate Principal/10th Grade stated, “This event stemmed from a vision that our student Owen White shared with administration and we’ve worked together with Owen, his parents, and representatives of the United States Olympic Committee to bring this into fruition.”

In preparation for Olympic Day, students were asked to read “Alongside His Wheelchair Rugby Career, Joe Jackson Strives to Share Adaptive Sports with Others” and to view several short video clips, emphasizing the creation of the Olympic Day Movement and that sports should be enjoyed everyday by everyone. Class discussion topics included:  Olympic Values of Friendship, Excellence and Respect.

During the game, players worked as a team to assist players who had fallen. Everyone in the crowd was supportive as they cheered the players all the way to the end. Overall, the wheelchair basketball game was not about the wheelchairs, it was about a sport that people truly enjoy. “Seeing the methods they used and the tricks they did were very impressive and it opened my mind to more.” sayed Kristiney Finley, an eleventh student here at SHS A&T.

The players were having fun, but were competitive and determined as they played the game. The energy they gave off was great which affected the crowds’ energy. “It was all just a great game.” commented eleventh grader, Kila Barrett. More people should inquire about Special Olympics and Olympic Day because they are amazing events to see and to learn about.

Overall, Olympic Day demonstrated that through friendship, excellence, and respect, anyone can do anything regardless of struggles or obstacles which try to stand in the way.